I have not always been a SAABophile

I have not always been a SAABophile.  It has grown on me.  My first car love was Alfa Romeo.  Influenced by a grade 5 teacher who changed from having an Alfa Romeo 2000 GTV and upgraded to a new Alfa Romeo Alfetta GT.  We had to do a class talk and I did it on the Alfa.  I hung around the local Alfa Romeo car dealer so much that they offered me a job to clean cars and their offices on a Saturday morning and school holidays.  It was not until years later I realized the exploitation.  I did a lot of work for them for very little money.  The bonus and thrill for me was that one of the salesmen lived around the corner so I got a ride in the car he had selected to drive home that night.  At one stage on the lot they had an orange SAAB 99.  Riding to work one morning in this I encountered the quirky seatbelts clamp and the ignition between the seats.  Around that time one summer a friend and I did the rounds of all the new car dealers asking for brochures of their latest car offerings.  This was another early SAAB encounter.

Fast forward to the 2000s and my wife had had a SAAB desire.  She like the shape and style.  In the year 2000 we had two Toyota Corollas.  One we had bought from my father’s estate so was reasonably new and in good condition.  The other an older one we had had for about 6 years was 13 years old and clocking up lots of kilometers.  Our kids were getting older and we needed more a family car.  We had done a Queensland driving trip in the newer Corolla but it was squeezy with all our luggage.  We got our first 1989 SAAB 900i Combi in 2001 second hand from a lovely couple in Caulfield.  They put us onto Swedish Prestige in Huntingdale where they got it serviced.  Although a distance to travel to and on the other side of town I knew the value in dealing with good reliable mechanics’ who knew the SAAB quirks and had the parts and knowledge.  The added factor that they gave you a loaner SAAB for the time they serviced your car so it made the trek worthwhile. 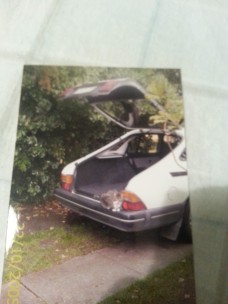 Keeping SAABy well maintained we had a trouble free ownership.  One minor accident in 2013 where I went into the back of another car at traffic lights.  And one instance I can recall where the car’s computer had to have some work done on it as it was making the engine run rough and misfire.  Over 7 years of ownership, a Queensland driving holiday, and clocking up around 150,000 kilometers when we acquired my father in law’s 10 year old Corolla with low kilometers and good condition we were a car in excess.  We tried but could not find a buyer for SAABy so it was a sad day handing her over to a wrecker when it was not required in 2009.

The SAAB love was passed on to the next generation and my daughter sought out a low kilometre traveled 900i sedan for her first car in 2017.  As she was studying I agreed to fly interstate to pick up, buy, and drive it back from Wagga Wagga to Melbourne.  My SAAB love was rekindled and as our Corolla clocked up kilometers and deteriorated I started my SAAB search as a replacement.

A couple of years later kindled by the life is too short thinking and wanting to have more of a safe feeling whilst commuting on the Ring Road I acquired our 1996 SAAB 900s at the start of 2019.  The trip to Canberra to pick up Barb the SAAB was an adventure with an overnight stop over in Albury Wodonga to catch up with a work colleague.  And this was a revisiting of the stop over for lunch with my daughter’s SAAB a couple of years beforehand in the same town and with the same colleague. 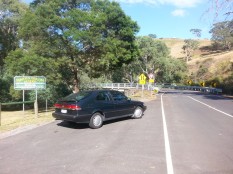 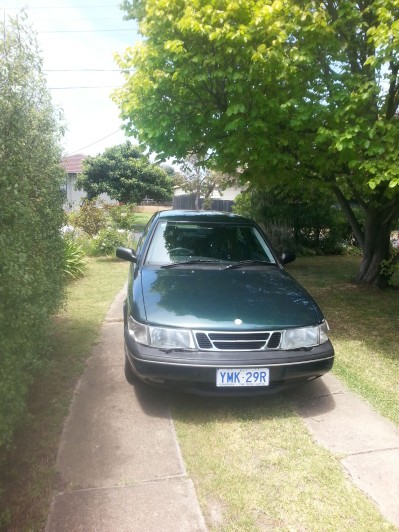 As Jeremy Clarkson from Top Gear said once SAAB owners have a certain smug smile.  There is a knowledge that you have a unique and quirky car that is very safe.   It has been well engineered and thought out and when well maintained it is reliable.  It’s the shape, it’s the style, it’s the car I like.  Happy to be a SAAB owner and maintain the marque even though the company has ceased production.  And speaking of quirky here is a SAAB song

This entry was posted in Uncategorized. Bookmark the permalink.